n back to back weeks in April, Stryke Force participated in both the FIRST in Michigan State Championship at Saginaw Valley State University and the FIRST World Championship in Houston, Texas. 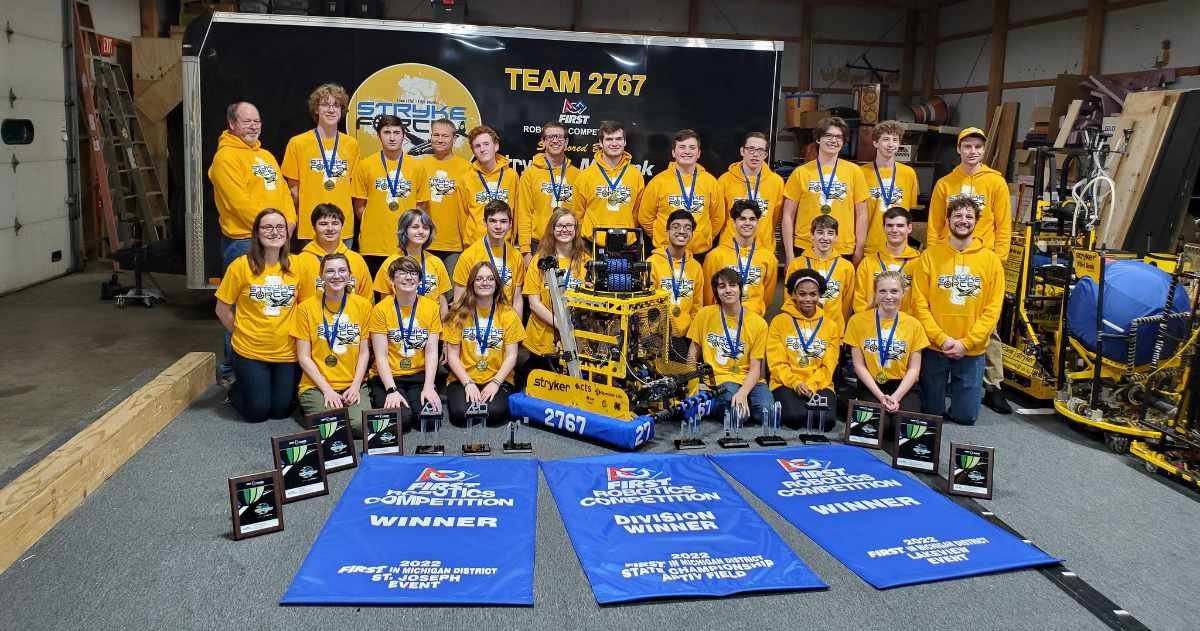 On Wednesday, April 13th our team arrived at Saginaw Valley State University. At the end of qualification matches we had a 12-0-0 record which also earned us the honor of being the team captain of the #1 alliance for the APTIV division. We selected Team 503 Frog Force and Team 5612 RoboRaptors as our alliance partners and won 1st place in our division with a 6-2-0 record. In the championship playoffs we won in the quarterfinals and made it as far as the semi-finals. We were thrilled to receive the Autonomous Award and earned a spot to compete at the world competition in Houston the following week.

Our team made a quick turn around with no time to unload our trailer as it left Kalamazoo for Houston on Monday, April 18th.

At the World Championship competition, there are six divisions; Stryke Force was placed in the Hopper division. Each division played a total of 125 qualification matches. Stryke Force completed qualification with a record of 7-3-0 in 10 matches and ranked 11th. We were super excited to be the first choice of the #5 alliance, captained by Team 4911 CyberKnights. Our other two alliance partners in the divisional finals were 488 Team XBOT and 2976 The Spartabots. Our alliance went 2-3-0 in the quarterfinals and lost in the semifinals. Stryke Force was awarded the Industrial Design Award.

We had a fantastic season and are so happy with everything we accomplished. It was so much fun to be back in person, see everyone, trade shirts, and collect buttons. We are looking forward to shifting focus to community outreach and bringing more young talent into our team during the off-season. Be watching our social media and website for the dates of our open house coming soon.